Why Do Older People’s Hands Tremble? 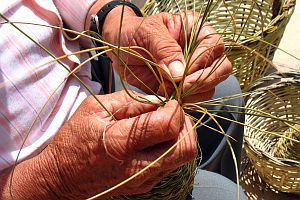 Everyone’s hands tremble a little bit. Hold your hands out in front of you and they will not remain perfectly still for long. However, some people’s hands tremble far more than usual, and this condition is more often observed in the elderly. Although Parkinson’s disease is sometimes the cause of trembling hands, more often than not, it’s a case of what is referred to as idiopathic or “essential tremor” (which means the cause is unknown).

An estimated 4 out of every 100 adults over the age of 40 has essential tremor. However, the condition is not confined to only the elderly. Though less common, children and young people can experience it too. What begins as a minor inconvenience can become practically disabling, making it difficult to perform the most simple everyday activities such as sipping a cup of tea or writing a check. Although the hands and arms are usually the body parts most greatly affected by essential tremor, it can also expend to other areas, such as the head and feet.

Despite the fact that it is one of the most frequent neurological conditions, there is still no known cause of essential tremor. It tends to have a genetic component: there is a 50% chance that someone whose parent has essential tremor will also acquire the condition.

Findings from scientists at the American Academy of Neurology have shown that those with essential tremor are more than twice as likely to develop dementia as those without the condition. Although this may be disturbing news to those suffering from it, the findings may allow for earlier and more effective treatment so as to delay the onset and reduce the progression of dementia.

While Parkinson’s disease is a condition that leads to steady deterioration, essential tremor is a condition that is manageable and does not necessarily get worse. It is not uncommon for someone to have a minor case of it for most of his or her life without it ever progressing beyond a slight tremor.

As of today, there is no cure for essential tremor, and there are no particularly effective medications to help with the condition. However, for those who suffer from more than a mild case of it, there is some hope that increased research will lead to the discovery of the cause, and that subsequently a treatment or cure can be found.