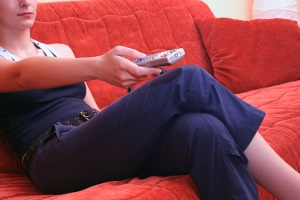 It’s no secret that many Americans’ eating habits have taken a turn for the worse over the past 20 years in terms of the quantity, quality and combination of foods we eat. A number of diet-related trends have converged to help create a perfect storm of expanding waistlines:

But for all the evidence that the American diet has played a prominent role in the current obesity epidemic, there is also evidence that another factor may be even more important.

On average, Americans are LESS PHYSICALLY ACTIVE THAN AT ANY OTHER TIME in our history. Sweeping changes in the kinds of work we do and the way we do it, along with changes in how we get from place to place and how we spend our leisure time have meant that much of the population just doesn’t move around very much. We increasingly lead very sedentary lives.

A recent study published in the American Journal of Medicine drives home this point. According to researchers at Stanford University who analyzed 20 years of data from the National Health and Nutrition Examination Survey, a very sharp drop in leisure-time physical activity may be responsible for the general upward trend in obesity rates.

Dr. Uri Ladabaum, Associate Professor of Medicine at Stanford University School of Medicine and lead investigator, noted that total daily calorie, fat, carbohydrate and protein consumption hasn’t actually changed much over the past 20 years but that the general level of physical activity has. “At the population level, we found a significant association between the level of leisure-time physical activity, but not daily caloric intake, and the increases in both BMI and waist circumference.”

The fall-off in physical activity over the past two decades is truly striking:

Over the same time frame, the incidence of obesity across the country has grown. While the average BMI has increased across the board, the most dramatic change has been among woman between the ages of 18 and 39.

An earlier study reported in the December 2013 Mayo Clinic Proceedings painted a similarly grim picture. Based on two years’ worth of data collected from sensors attached to 2,600 people, investigators concluded:

According to Edward C. Archer, a researcher at the University of Alabama at Birmingham, “We’ve engineered physical activity out of our daily lives and that’s causing the health disparities that we have in this country.”

There is a very clear relationship between physical activity and your health—including your musculoskeletal health. But it’s also true that there’s a link between your musculoskeletal health and your ability to lead an active lifestyle. If you’re suffering from back, neck or joint pain, it can be very difficult to exercise. This in turn raises your risk of weight gain as well as your risk of other health problems.

We can help relieve musculoskeletal pain and restore your mobility. Just call or visit our office today!

‘Get Up!’ or lose hours of your life every day, scientist says. http://www.latimes.com/science/sciencenow/la-sci-sn-get-up-20140731-story.html