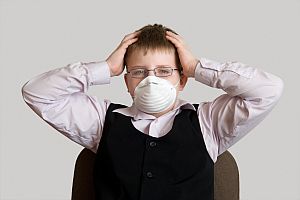 The term hypochondria (also called hypochondriasis) is defined as having an abnormal anxiety about one’s health. Someone with hypochondria (a hypochondriac) will believe that they are seriously ill, despite reassurances from medical professionals and medical tests that prove they are perfectly well. It is classified as a psychosomatic disorder, meaning it is a mental illness that has physical symptoms.

A hypochondriac may become anxious from perfectly normal bodily functions such as sweating, bowel movements or feeling their pulse. He or she may blow minor ailments out of proportion and feel that a runny nose or sore spot is an indication of a serious or even  life-threatening disease. Many with hypochondria may focus on one area of the body, or on a particular disease they dread getting. For example, some hypochondriacs will feel that each little pain they experience is due to cancer.

Because most people with hypochondria will visit their general practitioner rather than a mental health expert, the exact number of people with the condition is not known. However, experts estimate that between 0.8% and 8.5% of adults in America suffer from hypochondria.

Most people at one point or another in their lives have a minor ailment that they feel may indicate a serious illness. This is perfectly normal. However, if there is a preoccupying fear of illness that lasts longer than 6 months, it is an indication that hypochondria may be a problem.

Many individuals who suffer from hypochondria also have a concurrent mental disorder. In approximately 60% of cases of hypochondria, the person also has obsessive-compulsive disorder, panic disorder, major depression or generalized anxiety disorder.

It is common for hypochondriacs to experience what is referred to as “white coat syndrome.” This is where the patient experiences increased blood pressure, stress and anxiety when in the presence of a doctor or in a medical facility. To get accurate blood pressure measurements, patients sometimes have to take their own while at home or in another non-medical setting.

Hypochondria generally begins in early adulthood, often after an illness or the illness or death of a close friend or family member. Exposure to high stress can also trigger the syndrome. Mental health experts say that hypochondriacs tend to be self-critical, narcissistic and/or perfectionists.

Cognitive Behavioral Therapy (CBT) has been shown to be effective in treating hypochondria in many cases. This allows the patient to address their symptoms and learn ways of coping with them when they come up.