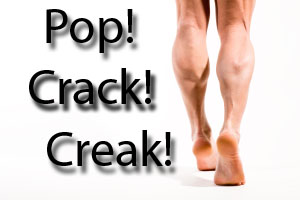 If your first thought when you saw the title of this article was, “Well, that word sounds a lot like “decrepit,”   you’re actually (sort of) on the right track. Crepitus is a medical term that is used to describe the popping, cracking, grating, or “creaky” sounds that sometimes occur when you move joints such as your knees, elbows, wrists, or ankles.

The sounds are most often caused by the presence of air in the closed subcutaneous tissues surrounding the joints. They can also be caused by the rubbing together of two rough surfaces, as in the case of osteoarthritis or rheumatoid arthritis, in which the cartilage surrounding the joints has eroded, causing surfaces to grind against each other. But in most cases, the popping or snapping sounds are the result of these buildups of air being released quickly due to movement of the joint. (As an aside, the term “crepitus” associated with this sudden release of gas is related to the Latin term “decreptitus”‘ meaning aged and infirm, but it probably wasn’t inspired by the myth of the alleged Roman god of flatulence named Crepitus.)

As a medical condition, crepitus is not usually considered a problem. It often appears in the mornings or after a period of inactivity, and goes away when your body “warms up.” However, if the popping and creaking sounds of crepitus last for long periods of time, or are accompanied by pain, signs of inflammation around the affected joint (swelling, redness, and increased temperature), or actual limitation of physical movement due to pain or stiffness, it is worth consulting your physician or chiropractor. In these cases, the popping and cracking sounds may actually be related to damage to the cartilage of the knees or other joints, or may be an early indication of damage to the articulating surfaces of the joints.

Crepitus and its associated pain and stiffness may be treated in many ways, including the application of ice packs, wearing elastic supports to allow sensitive subcutaneous tissue to heal, and exercises to strengthen the surrounding muscles. Swelling, stiffness, and pain surrounding the affected joint can usually be treated with over-the-counter analgesics such as aspirin or ibuprofen. Depending on the situation, your chiropractor may also recommend lifestyle changes such as losing weight, exercising more (or differently) and avoiding stress, or suggest nutritional supplements that can help you preserve or rebuild cartilage. If the condition is related to misalignment, chiropractic care of the spine or joints can help to reduce crepitus, as can the application of deep tissue massage or cross friction massage.

In any case, don’t worry too much about the occasional snap, crackle, and pop in your knees and other joints. Such sounds may, in fact, be associated with aging, but their presence doesn’t necessarily mean that you’re getting old and “decrepit.” It’s usually only if the crepitus is accompanied by pain and a noticeable restriction in your ability to move and flex the joints normally that you need to seek medical attention.