What is “Cervical Radiculopathy”? 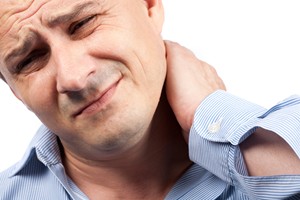 In layman’s terms, cervical radiculopathy is known as a “pinched nerve” located in the area of the cervical vertebrae (the part of your spine around your neck). It involves damage to a nerve or the disturbance of nerve function, which can lead to pain and disability.

The nerve roots in the area of the neck are responsible for carrying signals between the brain and the upper body, including the neck, arms, chest, upper back and shoulders. When one of the cervical nerve roots becomes compressed, it has trouble transmitting those signals. The resulting symptoms include muscle weakness, pain, tingling (pins and needles) or numbness, particularly in the arms and hands. Many experience it as a sharp pain that travels down the arm. Another general symptom is lack of coordination, particularly in your hands. You may find that symptoms get worse if you extend or turn the head. So if you find yourself dropping things a lot and also have some of the other symptoms, cervical radiculopathy may be the reason.

Cervical radiculopathy can have a variety of causes, but they all involve scenarios where pressure is put on the nerve roots. As we age, the discs of our spine naturally degenerate to some extent. Our vertebral discs lose fluid, so there is less cushioning between vertebrae, and the vertebrae themselves can sometimes become compressed due to bone loss. In response to the loss of bone, the body may create bone spurs to try to shore up the vertebrae, but this buildup can impinge on the area of the vertebrae through which the nerves run, putting pressure on the cervical nerve roots. In younger people, cervical radiculopathy is more commonly caused by an injury or acute trauma that causes a ruptured disc. The disc material then puts pressure on the nerves, causing pain.

For most people, cervical radiculopathy disappears in time, with mild treatment or no treatment at all. For some people, however, it can become a chronic condition. Common treatments include pain medication such as non-steroidal anti-inflammatories like ibuprofen. Some people are also treated with steroid injections in the cervical area. However, it’s important to understand that these approaches are intended primarily to reduce inflammation and pain. This means that relief is usually temporary and that the symptoms are likely to return.

Of all the treatments available, chiropractic care is among the best therapy for cervical radiculopathy, since it is effective as well as non-invasive and drug-free. Your chiropractor can perform an adjustment to take pressure off the nerve roots, restoring function and range of motion while helping to eliminate pain. In some cases, physical therapy can also help by stretching and strengthening the neck muscles. Only in more severe cases is surgery necessary to take pressure off the nerve roots.