Riddle Me This: How Is Willpower Like a Muscle? 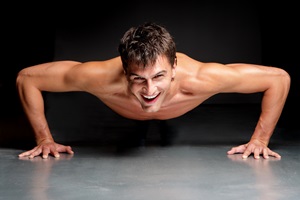 Answer: The more you use it, the stronger it becomes.

It’s true! While we’re not all gifted with the same amount the stuff, willpower—whether you call it willpower, self-control or personal discipline—is a trait that we can develop over time through exercise. That’s very good news for anyone who’s ever been frustrated at their inability to stick with a diet or exercise program, or who can’t keep promises (even important ones) they make to themselves and others.

But recent research has shown that this isn’t the limit of the analogy. It turns out that the willpower-muscle analogy actually works along at least three different dimensions.

When it comes to self-control, we live in a use-it or lose-it world.

While it’s true that we can build up our self-discipline by using it, it’s equally true that our willpower atrophies when we don’t exercise it enough. So it’s actually important to apply self-control in small ways throughout the day even if you’re not trying to quit smoking or squeeze into a smaller pair of jeans.

And it you are working toward some sort of larger, longer-term lifestyle goal, it’s a good idea to approach it the way you would a new workout. Start with small, achievable steps and build from there.

According to Florida State University researchers and others who have tackled this topic, there is evidence that self-discipline is, at least in some respects, a finite resource. Willpower becomes depleted when we place ourselves in situations where we have to exercise it repeatedly in a relatively short period of time. Experiments have demonstrated that people who are asked to accomplish a series of tasks that require self-control perform each successive task less well relative to a control group that didn’t need to exert willpower on prior tasks.

Some studies have shown that exercising self-control may deplete the body’s stores of glucose. This suggests that managing your blood sugar by eating small meals and exercising in short bursts throughout the day may help you maintain your store of self-control. Plus, getting enough high-quality sleep—as little as an hour more per night for most people—can help people exert willpower more effectively.

So what’s the relationship between self-discipline and your health? To a large extent, good health is the result of a consistently healthy lifestyle—particularly nutrition, exercise and sleep. Willpower is what helps you do the right thing when you don’t really want to at that moment. It’s also what helps you resist the temptation to do things you know will work against you in the long run.

Here are some other ideas you can use to make the most of the self-discipline you have now and build more for the future:

The payoff from having more self-discipline is considerable. Dr. Roy Baumeister, professor of psychology at Florida State University, says “Kids do better in school, people do better at work. Look at just about any major category of problem that people are suffering from and odds are pretty good that self-control is implicated in some way.”

Plus, studies have shown that using your willpower to create new, healthy habits can have a cascading effect in other areas of your life. Exercise is a great example—when people start exercising habitually, it becomes easier for them to develop more good habits in other areas of their lives.

Is Willpower a Limited Resource? https://www.apa.org/helpcenter/willpower-limited-resource.pdf