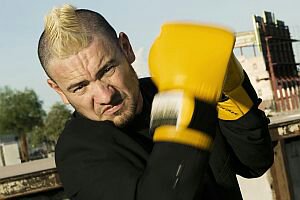 Mixed Martial Arts (MMA) is a full-contact sport that combines techniques from a range of different martial arts. It allows for such techniques as grappling and striking, combining the moves of boxing and wrestling, among others. The sport can involve techniques from Brazilian jiu-jitsu, wrestling, judo, karate, kickboxing, muai Thai and taekwondo.

The strikes and holds involved in MMA are rough on the musculoskeletal system and (no surprise) frequently cause injuries, particularly to the neck and spine. A 4-month study of four MMA tournaments found that of the 427 respondents to a survey, there had been 103 cases of cervical neck injury, five requiring hospitalization and causing a neurological deficit.

The examining physicians describe these types of injuries as similar to those of whiplash. Life-threatening injuries to the central nervous system are common. Blows to the head can cause a hyperextension and hyperflexion of the neck, causing a sprain or strain to the neck region and varying neurological problems.

In a sport that so frequently causes misalignment of the spine and joint injury, it is especially important to take advantage of the benefits of chiropractic care.

MMA athletes find that chiropractic improves their balance, coordination and strength due to the improved neurological signaling that an aligned spine provides. They find that reaction times improve and it gives them an edge on the competition.

Former professional boxer Evander Holyfield said, “I do believe in Chiropractic. I found that going to a Chiropractor three times a week helps my performance.

Once I drove 20 miles to see a chiropractor before a fight. I have to have my adjustment before I get in the ring. The majority of boxers go to get that edge.”According to Frank Shamrock, former UFC light heavyweight champion and MMA fighter, “When I was 16 in high school I started playing basketball and my right leg went numb and started to drag slightly behind me.

I went to the regular MD who did x-rays and told me that I had broken my back at an early stage of my life, that I would need immediate surgery, and I’d have pain and limited mobility for the rest of my life. So, being the highly holistic and active person I am, I went and saw a chiropractor.” Shamrock added, “I’ve been seeing chiropractic for 16 years now.

It has been the change in my life that has allowed me to participate in professional athletics and to achieve six world championships … I believe in chiropractic.”