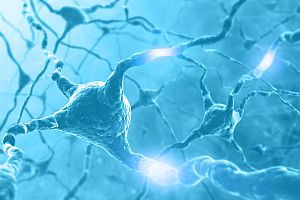 Nerve impulses (also called action potential) are electrical signals that travel along a nerve channel. These signals act as communication between cells and between various parts of the body. It is through our nerves that we feel pain, heat or cold, see our surroundings, hear sounds, and control our muscles. Neurons are the specialized type of cells that carry these signals.

At the core of a neuron is the soma, which can be anywhere from 4 to 100 micrometers in diameter. Extending from the soma are dendrites, which are tendrils that give the soma the appearance of someone experiencing a “bad hair day.” The dendrites receive signals sent from other neural cells. Extending from each soma is an axon, a single, long channel along which signals are sent to other cells.

Nerve impulses are traveling electrochemical signals that change in charge as they travel along a nerve channel. The transmission of electrical energy along a nerve is typically measured in millivolts (+30mV to ‑70 mV), with times measured in milliseconds. Speeds range from 10 to 100 meters per second. Considering the fact that a large adult human is about 2 meters tall, a signal can pass from head to toe in only 20–200 milliseconds.

When the cell membrane near the soma is stimulated beyond a certain threshold (for humans, around ‑30mV), it excites chemical gateways to open in the membrane letting positive sodium ions into the axon. This is called “depolarization,” giving the axon an internally positive charge, instead of a negative one. Within a millisecond, nearby potassium gateways open, letting positive potassium ions out of the axon, restoring the at-rest, negative potential. This is called “repolarization.”

This same process occurs in the adjacent area of the axon’s cell membrane, effectively moving the impulse down, along the axon toward the postsynaptic or receiving cell. Sodium gates open, depolarizing the axon at that point, stimulating adjacent sodium gates to open. Potassium gates respond in the wake of the depolarization in order to restore the normal conditions locally in the axon. This process repeats all along the length of the axon, transmitting the electrical impulse.

When nerve channels are damaged by physical trauma, the body may feel extreme pain, causing muscle tension, which can spread the pain and discomfort to other, nearby parts of the body. If nerve channels are interrupted by chemical interference (drugs or toxins), the body may not feel anything locally. Certain chemicals, such as snake venom and local anesthetics (lidocaine, benzocaine, novocaine) stop action potentials from being transmitted along nerve channels. They can prevent you from feeling pain, but they can also stop you from controlling your muscles.

None of us would live very long without the action of nerve impulses, since these signals are a key part of the “wiring” system that lets us perceive our environment and allows the various parts of our body to communicate and coordinate their activities. Even when those impulses involve pain, they’re performing a very important function—letting us know that something is wrong. However, it is also possible for nerve pathways to become obstructed or for neural impulses to get out of hand and become a source of chronic pain. Chiropractors are experts in diagnosing and treating neuromusculoskeletal conditions such as these, and they have developed a wide range of safe and effective therapies that do not require drugs or surgery.