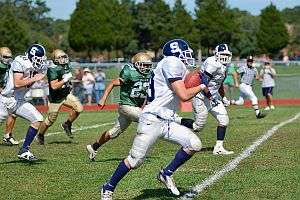 People often assume that lower back pain (LBP) is just a problem just for the elderly, or for middle-aged adults who have a history of physical wear and tear. But this is simply untrue. The fact is that over 31 million Americans live with lower back pain on a regular basis, and a great number of them are adolescents.

Recent studies have indicated that many high school students who participate in sports programs are at high risk for developing lower back pain—and worse, few of them seek or receive proper chiropractic treatment. This is increasingly recognized as a legitimate public health concern: A 25-year-long study of adolescent risk factors for LBP, published in 2000, revealed that students who had lower back pain at age 14 were likelier to have back pain 25 years later than students who didn’t have LBP when they were teenagers. This study suggested that prevention of back pain in youth may contribute to the absence of back pain in adulthood.

14 years later, not much has changed. A recent study published in the British Journal of Sports Medicine examined Finnish teenage athletes participating in a variety of sports. Researchers looked at the experience of 464 male and female athletes representing 22 basketball, floorball (a type of floor hockey popular in Nordic countries), ice hockey, and volleyball teams. They found that 255 athletes (55%) had experienced lower back pain in the past year. 51 players (11%) had suffered for longer than four weeks, and 80 (17.2%) had pain so severe that they had to miss training. However, only about 73 of them (29% of those with back pain) had received any medical attention for LBP.

Another study of 12,306 adolescent soccer players found that a significant percentage of them were likely to suffer injuries that cause lower back pain, resulting in the loss of 10,265 training days and—more importantly—putting them at higher risk for LBP as they age. The study also concluded that the likelihood of injury resulting in LBP increased dramatically if a young athlete received no medical attention, then returned to play before the injury had healed.

Parents of teenage athletes should weigh all of this information carefully if their son or daughter begins to complain of lower back pain. Don’t let them ignore it and go back to playing without having the condition treated. Remember—“walking it off” today could have longer-term health consequences that go beyond the discomfort or pain they’re feeling in the moment. Parents should also know that other studies have found chiropractic care to be the safest, most effective form of LBP treatment. Your chiropractor can help relieve your child’s pain today and help prevent a lifetime of lower back pain in the future, without drugs and without surgery. Call or visit our office today to learn more.