Get on the Fast Track to Relief! Chiropractic Care Can Provide Back Pain Relief More Quickly Than Many People Realize 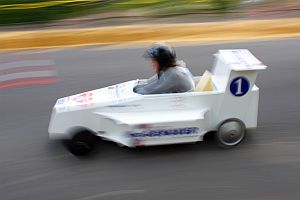 Chronic back pain is one of the most prevalent health care problems in the world. In America, over a third of the population – more people than are affected by cancer, heart disease, and diabetes combined – suffer from it. Worldwide, it is the single leading cause of disability. Americans spend over $50 billion each year to treat their back pain. As a nation, we also bear other costs in the form of lost productivity and lost wages, not to mention a reduced quality of life.

So if you’re one of the 600 million people around the world with back pain, what should you do about it? If you visit most medical doctors, they are likely to recommend rest and prescribe some type of medication to manage the pain. The trouble with these treatments is that they do little to address the underlying problem. Worse still, some drugs are highly addictive and have negative side effects. For more severe cases, surgery is typically the only other options offered.

There is another alternative—chiropractic care. Over the years, many studies have demonstrated chiropractic’s ability to successfully relieve back pain. For example, a study published in the Journal of Pain in February 2014 compared chiropractic spinal manipulation therapy (SMT) to no treatment, and (unsurprisingly) found chiropractic superior. What was more interesting about this study, however, is that it also compared chiropractic SMT to “fake” or placebo SMT, presented to the patients either without any accompanying description, or with a talk that specifically told the patients that it could significantly reduce their back pain. This second group “expected” relief as much as the real SMT group did, so researchers could test whether any relief they experienced was due only to the placebo effect. The group of patients receiving real chiropractic SMT reported significantly more reduction of pain than any of the other groups involved in the study, including the two placebo groups. So the effect of SMT is very real, not imagined.

Even more fascinating are the results of a study published in the November 2013 issue of Spine. In this study, 183 adults with chronic spinal pain were divided into two groups. One of the groups received placebo adjustments meant to simulate chiropractic care. The other group received real chiropractic adjustments—but only two sessions.

Patients were assessed for the intensity of their pain on a scale of 0 to 10, and their physical range of motion was assessed using a standard Functional Rating Index. At the end of the two-week study, the patients who had received only two chiropractic treatments reported significantly more reduced pain than the placebo group, more improvements in physical function, more global improvement (48% vs. 24%), and more satisfaction with their treatment (78% vs. 56%). The primary finding of the researchers was that chiropractic was far superior to the placebo care, but they also noted how quickly these results occurred—after only two treatments!

So if you are looking for relief for your back pain—and fast relief—these studies seem to indicate that chiropractic care is the way to go. The comparison of patient satisfaction is particularly interesting, since it supports the conclusions of many other studies and surveys conducted by experts inside and outside the healthcare community. These findings echoed the results of a recent survey conducted by Consumer Reports. The survey asked 45,601 participating subscribers with back pain to rate their satisfaction with various treatment options, including both alternative therapies and conventional therapies offered by medical doctors. The results were conclusive. In the treatment of back pain, “Chiropractic outperformed all other back-pain treatments.” Chiropractic care was also rated by the Consumer Reports subscribers as helping a lot with their neck pain, osteoarthritis, and several of the other 12 conditions the pollsters and editors examined. In fact, it was often rated more highly than relief obtained from prescription medications.

The vast majority of chiropractic patients suffering from back pain are very satisfied with the care they receive from their chiropractors and with the results of their treatment. So don’t just “live with” your back pain—do something to eliminate it. Call your chiropractor today, and see for yourself the difference that safe, effective chiropractic care can make!