Food as Medicine: Close-Up on Cumin 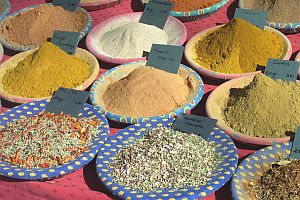 If “having a pedigree” is an important factor for you when you’re considering the nutritional or medicinal value of food, it’s difficult to find a food with a longer history than cumin. Cumin (also known as comino, cuminum cyminum, cuminum odorum, jeeraka, svetajiraka, and zira) is an herb whose medicinal qualities are mentioned in the Bible (both Old and New Testaments). Cumin was also part of the medical tradition in ancient Egypt, in India (cumin is a staple of Ayurvedic medicine), in the Muslim world, and in ancient Greece.

Although cumin is commonly used in the preparation of foods from each of these areas, it has also been promoted for its medicinal uses—to treat digestive problems, diarrhea, colic, bloating (cumin is a mild diuretic), to reduce inflammation, and even as an aphrodisiac. In terms of modern research, cumin has been found to have strong antioxidant and antimicrobial properties, and a study in the Journal of Ethnopharmacology found that cumin seeds help to regulate blood sugar levels, and thus may be of use not only as an antidiabetic (to prevent diabetes) but to treat those who already have the disease. Similar studies in Nutrition Research found that cumin not only helped to reduce hypoglycemia, but also to reduce body weight.

Cumin is also a known carminative, meaning that it has the ability to reduce the formation of gas and thus improve digestion. This is why it is common in Ayurvedic medicine, where it is both prescribed as a remedy for gas and used in cooking to reduce the flatulence caused by bean-based dishes. Cumin does have some analgesic (pain relieving) qualities, and is used as a tea in some cultures to treat headaches and other minor pains. Some have even recommended the combination of pureed bananas and cumin as a treatment for insomnia.

Today scientists theorize that one of the reasons cumin may have some curative properties is that it contains thymoquinone, a phytochemical also known as TQ that is being studied as a potential treatment for many diseases, including cancer. A 2005 study from India found that black cumin oil was effective in killing 50 out of 54 bacterial strains they tested—despite the fact that these same strains showed evidence of having developed resistance to 20 common antibiotics. In India, black cumin seed has also been proven effective in preventing withdrawal symptoms in patients with opium addiction. Research is currently underway to test the effectiveness of black cumin seed in reducing oxidative stress in the blood, lowering cholesterol, preventing and treating cancers and some forms of seizure, and treating rheumatoid arthritis.

Given all the interest in cumin and its potential health benefits, it’s reasonable to ask whether there might be risks associated with it as well. So far, there doesn’t appear to be a “down side” to adding more cumin to your diet. No serious contraindications have been noted in the medical literature, with one possible exception—you might want to check with your doctor if you are taking certain classes of anti-diabetic medications.

So not only can cumin bring an exotic taste to many of your more common recipes, it may also offer some health benefits along the way!