Fewer Kids Participating in Team Sports: Why We Should Worry 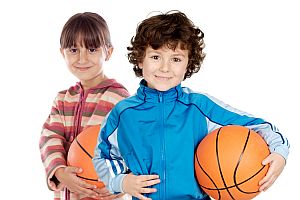 Inactivity is one of the most dangerous health risks to Americans today. Adults are spending too many hours per day sitting at their desks at work, behind the wheels of their cars, and on their couches at night watching TV, playing video games, or chatting on computers—and it’s literally killing us. Inactivity has been identified as one of the most serious risk factors for a wide range of health problems, one that experts believe has contributed to epidemic-level increases in obesity, diabetes, heart disease, cardiovascular problems, and even mental conditions such as depression and senility. As adults set examples for their children, this trend toward sedentary behavior also spells trouble for the youth of America.

Numerous studies have shown the benefits of learning to exercise regularly early in life, which not only reduces the incidences of these diseases later on, but also establishes a foundation of physical health and good habits that make it easier to keep exercising as we grow older. So it is with some concern that public health figures view recent statistics that show that the youth of America are exercising less and less, thus establishing a pattern of inactivity early in life—a pattern that may seriously imperil their health as they grow older. Just like adults, preteens and teens are spending more of their time playing video games, watching TV, and sitting at their computers and less of their time getting any kind of healthful exercise.

This kind of inactivity shows itself most strikingly in the percentage of young people engaged in sports, especially team sports such as baseball, basketball, tackle football, and soccer. According to a recent survey, combined participation in these sports among children aged 6 to 17 fell approximately 4% between 2008 and 2012. The data for this survey came from school sports groups, youth sports leagues, and sports industry association statistics and is remarkable because during that same period, the population of 6- to 17-year-olds fell only 0.6%. According to the U.S. Census for those years, there were only slightly fewer kids, and many of them were abandoning team sports.

Health experts consider this a grave concern because participation in team sports has long been viewed as an indicator of healthy attitudes toward exercise as well as a solid defense against the increasing rates of disease-causing inactivity. Even as other types of unstructured outdoor play (such as climbing trees, jumping rope, and playing tag) faded as common childhood pastimes, organized sports had remained relatively strong, with large numbers of participants. But this new data is showing that even well-established team sports may be losing ground to more sedentary lifestyle choices.

The number of young players participating in organized team tackle football between 2008 and 2012 dropped 5.4%, from 3.26 million to 3.08 million. During the same period, even larger drops were seen in the number of kids participating in soccer (-7.1%, from 7.11 million to 6.61 million), baseball (-7.2%, from 6.04 million to 5.61 million), and basketball (-8.3%, from 7.59 million to 6.95 million). The only team sports in which participation went up during these years were fringe ones with historically much smaller numbers of participants—ice hockey (+64%, from 0.33 million to 0.55 million) and lacrosse (+158.1%, from 0.30 million to 0.77 million). While these sports represent a bright spot in the statistics, even rapid growth of these sports won’t do much to offset the broader decline in the numbers of kids playing football, soccer, baseball, and basketball.

As William W. Dexter, President of the American College of Sports Medicine, puts it, “It is much more likely that someone who is active in their childhood is going to remain active into their adulthood.” And it’s just as likely that someone who develops a pattern of inactivity in their childhood is going to be inactive as they age. For this reason, the recent decline in youth sports participation can be seen as a decidedly negative indicator of a trend that could have long-lasting consequences.