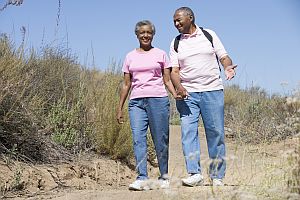 We all know that exercise is good for us at any age. What is becoming more apparent, however, is that developing the habits of regular exercise in the present—meaning at whatever age you happen to be right now —will pay off for you in the future.

A recent study discussed in the January edition of the journal Nursing Older People suggests that exercise plays a crucial part in enabling older people to retain their mobility and improve their overall quality of life. The study examined the effects of a three-month, twice-weekly exercise class on people aged 60 and older and found that the participants’ overall strength, fitness, coordination, and balance improved. More importantly, the participants in the class were then motivated to continue exercising after the study ended, partly because the exercise classes helped them to overcome their sense of social isolation.

A similar study published in the American Journal of Medicine provided even more evidence that exercise can provide not only a longer life, but a more meaningful one. Dr. Preethi Srikanthan and his associates at UCLA found that the more muscle mass older people have, the less likely they are to die prematurely. Their studies indicate that the amount of muscle mass is a better predictor of both longevity and the ability to perform normal functions than body mass index (BMI) measurements, because increased muscle mass decreases their metabolic risk.

Combined with other alarming results from studies on the dangers of inactivity and sitting too much (one such study indicates that every hour spent sitting per day after the age of 60 decreases your ability to perform normal activities like dressing, bathing, and walking by 50%), these findings make a strong case for preparing for one’s golden years by exercising more now, while it’s easier. Developing healthy exercise habits can even be seen as preventative, in that it seems to reduce the risk of developing disabling diseases. A study published in the Archives of Internal Medicine found that people who were more fit in their middle age had significantly lower rates of heart disease, kidney disease, stroke, diabetes, colon cancer, lung cancer, obstructive pulmonary conditions, and even Alzheimer’s disease when they reached their forties and fifties. In this study, for every unit of improvement on a standard scale of physical fitness, the subjects experienced a 20% reduction in the incidence of the eight chronic illnesses being tracked. Those with the highest levels of physical fitness when they were young developed the fewest chronic conditions during the last five years of their lives.

So if you’re concerned about living a longer, more productive and satisfying life, one way to achieve it seems clear—start exercising more now and continue to exercise regularly. The stronger and more fit you are today will, to some extent, determine how strong and fit you are when you get older and whether you’ll be able to get around and enjoy your life when you reach your golden years.