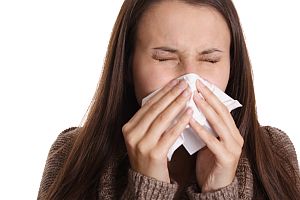 An allergy is a reaction of the immune system to a chemical the body sees as a threat. The chemical involved in prompting this disorder is called an “allergen.” To most people, the substance of the allergen remains entirely harmless, causing no reaction whatsoever. In those with an allergic reaction, however, their immune system produces antibodies to fight off the foreign substance, creating inflammation that can range from mildly uncomfortable in some to life-threatening in others.

Symptoms can include swelling of tissues like those in the nose, sinuses and airways, or they can include redness and itching around the eyes, sneezing, coughing, wheezing, eczema, hives, bloating, vomiting and diarrhea.

Sometimes referred to as “multiple chemical sensitivity” (MCS) or “twentieth century disease,” environmental sensitivities can result in symptoms that look like those of allergies. The key difference is that these sources of irritation do not directly affect the immune system. In other words, there is no allergen.

In the United States, the American Medical Association and other professional organizations within the mainstream medical community do not recognize this as a treatable illness. This is because some clinical trials related to this ailment have shown strong reactions to both placebos and the tested chemicals, suggesting to some healthcare professionals that the problem is purely psychological.

Symptoms of environmental sensitivities can resemble those normally associated with allergic reactions. They can also include headaches, nerve pain, dry eyes, dry mouth, weakness, trembling, tendonitis, seizures, overactive bladder, joint pains, dizziness, insomnia and problems with eyesight, like an inability to focus and blurring of vision.

A 1995 film called Safe, starring Julianne Moore, championed the plight of MCS sufferers. In 2007, the Canadian Human Rights Commission officially recognized environmental sensitivities as a disability. This affects Canadian anti-discrimination laws, prohibiting employers from taking action against employees who suffer from this type of ailment and encouraging companies to help reduce the potential impact of chemicals on workplace sufferers.

Some of the possible triggers for environmental sensitivities include,

In a person with environmental sensitivities, the triggering substance or environmental condition does not generate antibodies and is thus not an allergy. Taking steps to reduce stress, such as regular exercise or behavior modification can help improve the body’s ability to cope with such triggers.

By contrast, allergies are commonly treated with medication and immunotherapy. Immunotherapy involves the introduction of controlled quantities of an allergen into the body to desensitize it, decreasing the allergic reaction.