Chiropractic Care at the Cleveland Clinic 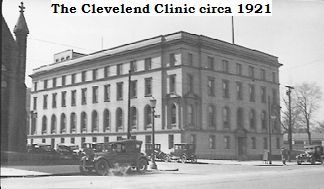 The integration of chiropractic medicine with mainstream healthcare is in the news everywhere these days, including at the Olympic Games in Sochi, where Doctors of Chiropractic were an integral part of the medical teams supporting many nations’ athletes. Chiropractic medicine has also been integrated into the regular services provided by such prestigious medical organizations as the Mayo Clinic, and is covered by numerous medical insurance providers in the US and elsewhere in the world. But few hospitals or clinics display the degree of integration of mainstream medicine and chiropractic as the Cleveland Clinic.

The Cleveland Clinic is a multidisciplinary, academic, non-profit medical center. It is a very well-regarded institution that was founded in Cleveland, Ohio, but that now has offices and hospitals in 10 other locations, including Toronto, Las Vegas, and Abu Dhabi. The Cleveland Clinic was established in 1921 to “provide patient care, research, and medical education in an ideal medical setting.” It has succeeded admirably, becoming one of the largest private medical centers in the world, treating more than 3,200,000 patients in 2009. It has been the site of numerous medical “firsts,” including the first coronary angiography in 1958, the first coronary artery bypass surgery in 1967, and the implementation of many procedures and practices now considered “standard” in the medical profession.

The Clinic’s teams of chiropractic physicians specialize in pain of the neck, back, pelvis, shoulder, elbow, wrist, knees, hips, and ankles. What they do differently than many mainstream physicians is to focus on the “whole patient,” as opposed to just the area that is producing pain or other symptoms. All of Cleveland Clinic’s chiropractic physicians have received supplementary training that also allows them to prescribe corrective exercises as well as nutritional and lifestyle advice that support the primary care provided by the clinic’s medical doctors. Treatment plans include many of the services provided by any Doctor of Chiropractic:

Medical doctors and Doctors of Chiropractic work together seamlessly at the Cleveland Clinic, with each professional bringing his or her own expertise and experience to the treatment of the “whole patient”. This prestigious institution provides a sort of role model for multidisciplinary healthcare. By bringing together traditional and alternative therapies, and combining them in a coordinated treatment plan, it offers patients the best of both worlds. The Cleveland Clinic’s approach also represents an important professional endorsement of chiropractic care and recognition that today’s chiropractic physicians can make unique contributions in even the most demanding clinical settings.