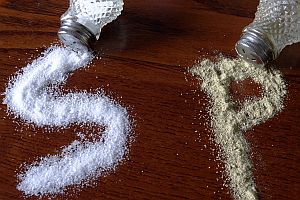 Iodine is a mineral needed by the body only in trace amounts. Its most important role is in the support of the thyroid gland. The hormones produced by the thyroid are necessary for cell metabolism and proper growth and development. A lack of iodine can lead to a condition called hypothyroidism.

Symptoms of iodine deficiency include tiredness, listlessness, weight gain, dry skin and sensitivity to changes in temperature. An enlarged thyroid gland is a classic symptom of hypothyroidism, and nine out of ten cases of goiter are due to an iodine deficiency.

Many developing countries have soil with very low levels of iodine and, as a result, grow produce that is also iodine deficient. This deficiency, combined with the fact that a large number of these same countries do not iodize their salt, means that sizable portions of their populations do not get enough iodine in their diets. By contrast, most people in the developed world get a sufficient amount of iodine through their diet and the use of table salt, which has almost universally had iodine added.

Pregnant women and infants are sometimes prescribed iodine to reduce the risk of cretinism, which is a condition where an iodine-deficient thyroid is responsible for stunted physical growth, deafness and mental retardation.

Some other uses for iodine are the treatment of fibrocystic breast disease, vaginitis and the topical disinfection of wounds. Iodine tablets are also used in cases of radiation exposure to reduce the risk of thyroid cancer (for example, by people living in the area of the Fukishima nuclear plant after the tsunami struck Japan in 2011).

The recommended daily intake of iodine (in micrograms per day) is as follows:

The best food source of iodine is iodized salt. Other foods rich in iodine are seaweed (kelp and bladderwrack), shellfish, garlic, soybeans and dark green leafy vegetables such as Swiss chard and spinach.

While it’s nearly impossible to get too much iodine from food sources alone, iodine toxicity can occur and can lead to potentially serious health problems. For this reason, it is important to check with your doctor before taking any type of iodine supplement to be sure that it’s really necessary.