A Day in the Life of a Crash Test Dummy 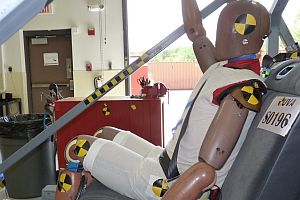 Crash test dummies. You probably don’t think about them very much (if at all), but you may owe them much more than you realize when it comes to your health and safety on the nation’s roads. Automobile makers use crash test dummies—that is, inanimate, human-like mannequins—to simulate the type and scale of injury that may occur in an automobile accident. Car and truck manufacturers go to great lengths to design and build safe vehicles, and these “full-scale anthropomorphic test devices” or “ADTs” take a real beating day after day as they provide data regarding velocity of impact, crushing force, bending, folding, or torque of the body, as well as deceleration rates during test collisions.

U.S., car accidents kill more than 30,000 people each year and injure many more. However, manufacturers work continually to make cars safer and accidents more survivable through crash-testing programs. According to the National Highway Traffic Safety Administration, from 1994 to 2009, the fatality rate decreased from 23 to 16 fatalities per 100,000 licensed drivers. Crash test dummies have played an important part in that achievement as a result of their role in car testing and design. They’ve also played an important part in reducing the severity of auto accident injuries.

In order to survive a car accident and walk away with minimal injuries, drivers and passengers must be able to withstand the changes in kinetic energy that occur when bodies in motion suddenly come to a stop or when bodies at rest are suddenly accelerated. A car’s safety features, including seat belts and air bags, are made to help mitigate the damage that these abrupt changes can cause to the human body. Crash test dummies allow safety engineers to identify how the changes in kinetic energy caused by car crashes affect the human body and its musculoskeletal system. Researchers use this data to identify areas where changes could improve a car’s safety rating. Additionally, the data is useful to gauge the effectiveness of these improvements once they have been made.

Anthropomorphic test devices, or ATDs, have become enormously sophisticated since the first crash test dummy was created. Dubbed Sierra Sam, the first ATD was made in 1949 to test how ejection seats in aircraft affected people. Today’s crash test dummies are designed to simulate human anatomy in great detail, and to respond as the human body would respond to the forces and impacts generated by auto accidents. Using a wide variety of advanced materials and sensor technologies, they can tell a researcher what types of injuries would likely have been sustained by vehicle occupants in a crash—anything from surface skin abrasions and contusions to soft tissue damage, broken bones and life-threatening internal injuries.

Combined with sensors in the test car itself and an array of slow-motion video cameras, ATDs have helped designers and engineers understand better than ever before exactly what happens in different kinds of accidents so that they can protect vehicle drivers and passengers. And there’s no doubt they’re very valuable members of the safety team—they can cost anywhere from $100,000 to $400,000!

ATDs are built in a variety of shapes and sizes to mimic human differences. However, they’re also used in ways that allow carefully controlled testing from crash scenario to crash scenario and from vehicle to vehicle. Before each test, engineers paint different parts of the crash test dummy’s body with different colors, allowing them to identify how each part of the body impacts parts of the vehicle’s interior.

Car accidents can be particularly hard on the musculoskeletal system—injuries to the back, neck, and extremities are common. Unfortunately, many of these injuries may go undetected immediately after a collision, when adrenalin is flowing and participants are generally eager to leave the scene and move on with their lives. Symptoms may appear days, weeks or even months afterward. Plus the injuries sustained in a car crash may cause a host of ongoing health complications, such as recurring headaches, neck stiffness, TMJ, dizziness and chronic back pain as well as reduced mobility.

Chiropractic physicians are specially trained to diagnose and treat the types of musculoskeletal injuries that many people suffer as a result of care accidents. If you or someone you care about has been involved in a car accident, it’s very important that they receive a prompt medical evaluation from a qualitied healthcare professional—even if they feel fine or are only experiencing minor symptoms. Detecting injuries as soon as possible often allows auto accident victims to recover more quickly and more completely, with less pain and less disability.